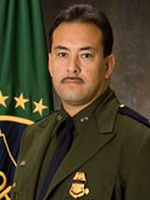 Salvador Nieto is a retired Chief Patrol Agent, having served as a member of the Senior Executive Service from September 2007 until he retired on December 31, 2013. Most recently, Mr. Nieto served as the Department of Homeland Security’s (DHS) Director of the Border Enforcement Coordination Cell at the El Paso Intelligence Center (EPIC). In this capacity, he directed a multi-jurisdictional information coordination cell which served as the primary location for DHS-focused southwest border interdiction, investigative, and intelligence coordination. These efforts enhanced information sharing and collaboration between DHS, the Department of Justice (DOJ), the Department of Defense (DOD), state, local and tribal law enforcement, as well as international and non-governmental partners.

Prior to directing the Border Enforcement Coordination Cell, Chief Nieto served as the Deputy Assistant Commissioner for U.S. Customs and Border Protection’s (CBP) Office of Intelligence and Operations Coordination (OIOC). In this capacity, Chief Nieto led response efforts to security and disaster events throughout the nation. He also directed training and developed the operational structure for intelligence analysts and field operators along the southwest border.

Prior to this, Chief Nieto served as the Chief of Northern and Coastal Border Operations for the U.S. Border Patrol headquarters in Washington, DC. In this role, he increased staffing by 110% to effectively bring border security to a manageable level across approximately 6,000 miles of northern U.S. land border and coastline.